How does one go from a shitty job to being a pioneer in the entertainment industry?

Well first you need to lose your job. Get fired, become a victim of retrenchment, quit, just lose it. Then you have to worry while simultaneously trying to survive and provide for yourself and your family.

Next, do what you love and figure out how to live off of it. It takes more than just talent to become successful. Determination, intelligence, courage, strength and the ability to reflect all play a role, and who knows this better than DJ Fauz?

With the Marked Men crew, a world of ideas and what seemed like nothing to lose, Fauz dived into the entertainment industry headfirst and swam against the current. Something which seems to have paid off considering that now, he’s the become one of Botswana’s most respected names in the Hip Hop community and among party goers.

I sat down with him as we discussed shady promoters, Diddy, and why Sean Kingston sucks.

Who did you start Kosher Sessions with and why?

Kosher Sessions started as Kosher Nights. It was something that Marked Men did and they actually gave me my first booking. Later on they would bring L-Tido and Maggz, then Khuli Chana but at the time they were launching a clothing label or something. We’d been boys since varsity, and as part of my newly jobless state I started doing a series of events at the [Cresta] President Hotel. So I hit them up and told them I liked the name, I proposed a partnership, and that was to be Kosher Sessions.
I wanted it to be strictly Hip Hop. At the time, it was usually some Hip Hop and a bit of House. I wanted it to be strictly Hip Hop and we could run with it. And that’s how Kosher was born.
Why? I needed money. *chuckles* I honestly wasn’t getting bookings, and I also wanted to do something that would be done right. I’d worked with almost everyone in this city and a lot of people are shady. These are the only people who are not shady. Or should I say not shady, yet. *laughs* They’re the least shady people I’d worked with.

And what kinda tricks did the shady promoters pull?

Well people would book me and not pay me, or they’d book and undercut prices. Make you travel to the other side of the country and pay you four months later. It was just really bad. I actually stopped playing on radio because of that. There’s a certain radio station I played for for like 4 years and they never once bothered to book me for a show. There were times when I’d play thrice a week and they still never bothered to hire me for a birthday party so at some point I just said “Fuck it”.

What was your vision though?

I wanted to start a movement. I’d discussed the idea with DJ C4 before he left for Joburg. A place to play the music I wanted to play and what people wanted to hear and luckily everything fell into place. I wanted to build Hip Hop. I was tired of going to a place and we were just the curtain raisers for the House guys. It was irritating so I wanted to shift the balance. To shift the balance and let the Hip Hop guys win. We didn’t know what we were doing at it was tough. I don’t think we thought it would go on for this long.

The time we booked Khuli was the time we had the most drama. We’d booked the venue and already put up flyers. Two weeks before the event we were asked to pay extra since we’d sold a lot of tickets, which we did. The Thursday before the show, which was gonna be on a Saturday, the venue people pulled out all together. They didn’t trust that it would be a safe, controlled environment. All in all it was a PR nightmare. We shifted venues and made it but it was rough.

You’ve produced two tracks so far The Commission and You Don’t Love Me. Marked Men is also a label that has artists such as VH and Chub Heightz. Have you found that having a place to freely play your music has helped to push your own brand?

Yes. It helps a lot. We’re very specific about what we do. We get to control and dictate everything and for us it’s really about quality over quantity. We take what we do very seriously.

Someone recently tweeted that Kosher truly is the only place to get a steady supply of good Hip Hop in Gaborone. It’s the only place where those who aren’t hardcore fans could still keep up. However, the DJ’s playlists tend to be monotonous..

The thing is, we have an assortment of DJs who come through and they all know the rules. We don’t allow them to repeat songs. If it’s coincidental then yeah, that happens, we can’t help that. There are classics that every DJ feels the need to throw into a set, like Fatman Scoop, you know. But yeah, it’s not like that. WE don’t even really get all that power as DJs. We have to play what the public wants, what’s on Trace and MTV Base. That’s how I end up jamming Sean Kingston when I can’t personally stand his wack shit or the likes of Carly Ray Jepsen. It’s what people want. The regulars get it and understand it now.

The Kosher stage has been graced by the likes of Tumi, Reason, Mo Molemi and Zeus. What has been your most memorable show so far?

Reason. Reason without a doubt. Reason came on that stage, alone and filled that fucking place. Everyone said we were selling out like “Who’s Reason?” There were only probably 50 people in there who knew who he was. He played a 1 hour set, we don’t allow that on the Kosher stage but he played for that long cos he was THAT good. He shut shit down, on his own. Reason can perform. 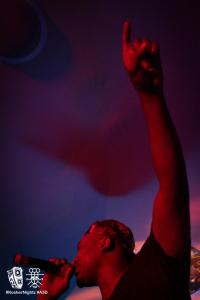 Motif is inspiring, you can tell that everyone there loves what they do..

Motif is amazing. You know, I respect Tumi, man. To a lot of people they aren’t all the way up there, but to me, they’re the best. They’re the least garbage like. A lot of people come up with these marijuana induced raps, but the Motif crew actually works.

Kosher also hosted the first official Tumblr Meet Up, how did that come about?

Well a friend, Kwame, approached me with the idea and it sounded cool. He had really outrageous ideas actually at first, but some were doable, so we started work on it. It was a bit tricky cos I didn’t expect everyone to know what Tumblr is, I had to explain to some, but overall it was a great event. We focused on the bloggers to get the news out. The internet’s influence and weight isn’t to be taken lightly, and all the cliquey Tumblr kids actually rocked up. *laughs*

And what’s been the most frustrating thing about the industry for you so far?

There’s a list man. There’s always something. If it’s not DJs asking you for 10 grand to go spend on booze and bitches it’s those constant “I’m at the door come let me in” texts in the middle of a set. A lot of people feel entitled to shit. I’m not opposed to paying someone their worth or doing favours but a lot of people just don’t go about shit the right way. I handle it though and you know, just, deal with it. I don’t think I’ve reached a level of success where I can afford to retaliate but we’ll see. Maybe one day.

Speaking of success, on the transition from IT to Djing and entertainment, you think you’ll ever go back?

I don’t think I could honestly. I can’t go back to being a “slave” so to speak. I’m making more money now than I ever did working for someone else man. I mean, it’s not about the money, but I’m well off. I’m alright. And besides, I love what I do. I’m still trying to grow the brand. I wanna create experiences, I wanna be That Guy. Like you know how when there’s a high profile launch, Diddy’s the Go To guy, he’s the one who sets it all up? I wanna be that. I’m not there yet.

*All images courtesy of the Kosher FB page found here